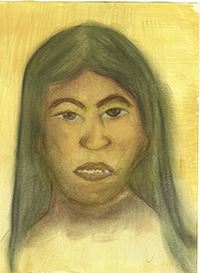 ne was not a very attractive daughter of the Hill Country, at least by today’s standards, but we must realize that she was more than 10,000 years old when University of Texas archaeologists discovered her remains in 1982 about fifteen miles north of Lakeway near the town of Leander.1 She traversed a terrain that in its natural state would be recognizable today, although not its people or animals. Leanne’s ancestors were first thought to be part of the Clovis migration from North Asia that traversed the Bering Strait land bridge. More recently, a number of archaeologists believe our earliest settlers may have come from South or East Asia or even Ice Age Europe, traveling to our hemisphere via some kind of raft or animal-skin kayak. In any case, there were continuous migrations to North America before and after Leanne, and archaeologists have found considerable evidence of these earliest residents of Central Texas, including campsites containing crude tools and weapons made of bone and flint. They have also discovered the remains of beasts such as mastodons and early species of horses, camels, elephants, and bison, all of which no longer exist. Travis County contained several prime archaeological sites; unfortunately, most of these have been lost either to development or man-made lakes and reservoirs.

The origins of our region actually began long before these earliest immigrants arrived in the Hill Country. Geologist Charles Woodruff, who wrote his doctoral dissertation on the Lake Travis area, traces 600 million years of geological change, evidenced by the more than 500,000 fossil varieties embedded in the limestone and dolomite rock cliffs and canyons that border the Lower Colorado River and its various tributaries. According to Woodruff, “These rocks and fossils are a window into the past.”

Some 200 million years ago, the original “Lake Travis” was a very large, shallow sea, replete with sandy beaches, oyster reefs, great tidal pools, and a wide variety of creepy, crawly creatures, including dinosaurs. To the west and north of this sea were rugged hills and bluffs that had once been part of the massive Llanorian or Ouschita Mountains that stretched from the present northern border of Texas to San Antonio and westward to El Paso. There is also evidence of volcanic activity. Over time these mountains eroded and sank beneath widening seas, buried under the enormous multi-layered deposits that today allow us to discover our prehistory.

Eventually, these seas too would recede, to be gradually replaced by the rugged hills, rivers, and lakes we so admire today. Among the many fascinating reminders of this early era are the fossilized reminders of twenty-one different types of dinosaurs that lived in Texas between 65 and 225 million years ago. The imprint of one of these enormous creatures was discovered at low water along the Lakeway shore of Lake Travis. This same limestone, of course, forms the exterior of countless Lakeway homes.

In 1997, Pleurocoelus officially became the state dinosaur of Texas. It lived approximately 100 million years ago, grew to between thirty and sixty feet, and weighed more than ten tons. Another Texas dinosaur was the Iguanodon, which had teeth like an iguana and five-fingered front feet, reached thirty feet in length, and weighed as much as five tons. Despite the preachments of various unscientific voices, including Fred Flintstone, the dinosaurs died off approximately 65 million years before human beings appeared on earth. Today, these magnificent creatures live on via museum facsimiles, lurid movies, and artistic re-creations. 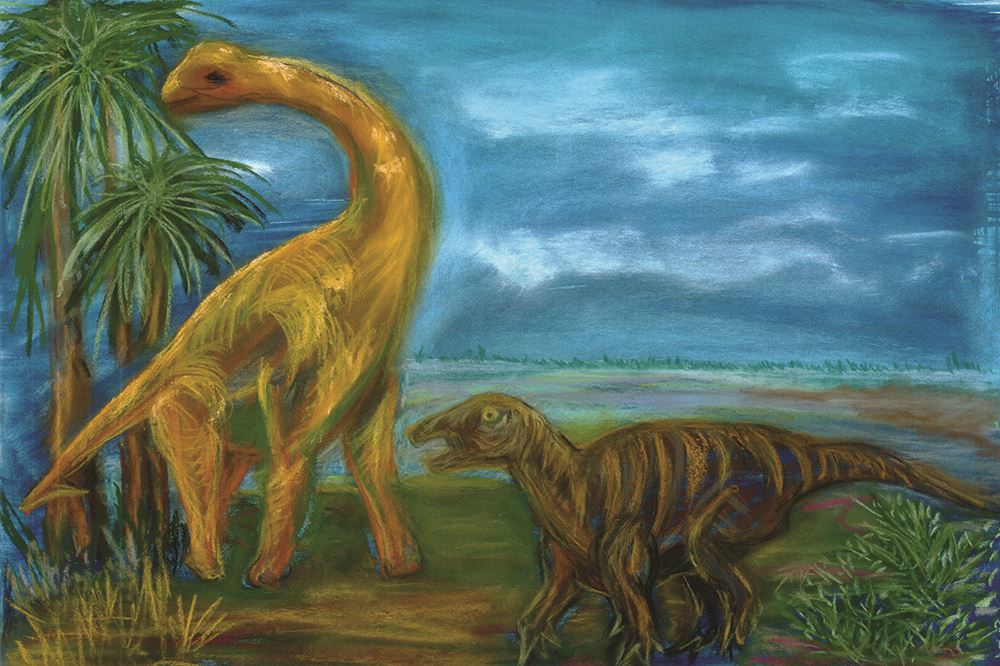 Lakeway artist Sandi Boston re-creates the dinosaur Pleurocoelus, which looked a bit like a large reptilian giraffe. The dinosaur on the right is an Iguanodon, meaning “iguana tooth.” He was a vegetarian whose remains were also found in Central Texas.

1. Needless to say, no one can reproduce Leanne or her contemporaries’ appearance with absolute certitude. Nevertheless, after her discovery, forensic specialists and artists at Dow Corning created a photographic reproduction of Leanne that can be seen on the website Texasbeyondhistory.net. Sandi Boston writes of her painting: “I felt my best attack would be from written descriptions. What I found was she would have slight Mongoloid features, with single eyelids, tilt to eyes and wide nostrils with no bridge to her nose. She also likely suffered from tooth decay and had missing teeth in front. From there, I assumed she would have dark hair with brown eyes.”