Twenty-six volunteers from the River of the Hills church youth group brought their strength and energy to Hamilton Greenbelt II, removing over 1-1/2  tons of dead wood from a remote part of the greenbelt.  Long hauls up and down steep trails made for a long day, but they persevered.  The group has offered their service to Lakeway’s parks one weekend a month, but that effort has been put on hold due to the COVID-19 restrictions. 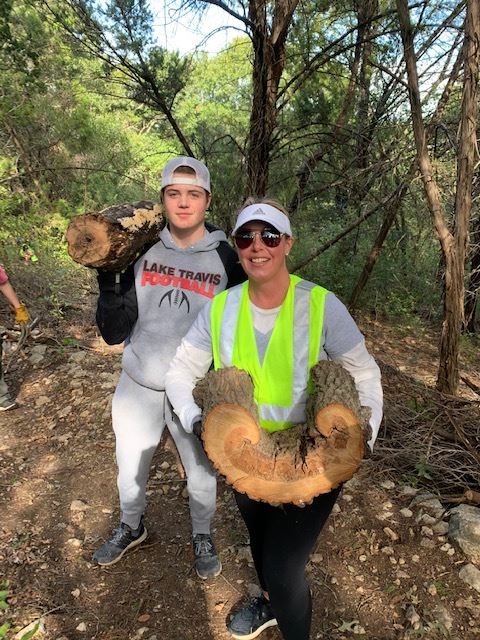 ​The Young Men's Service League donated their 2019 Ultimate Gift to Lakeway residents at risk of wildfire in Hamilton Greenbelt.  Read about it In the News. 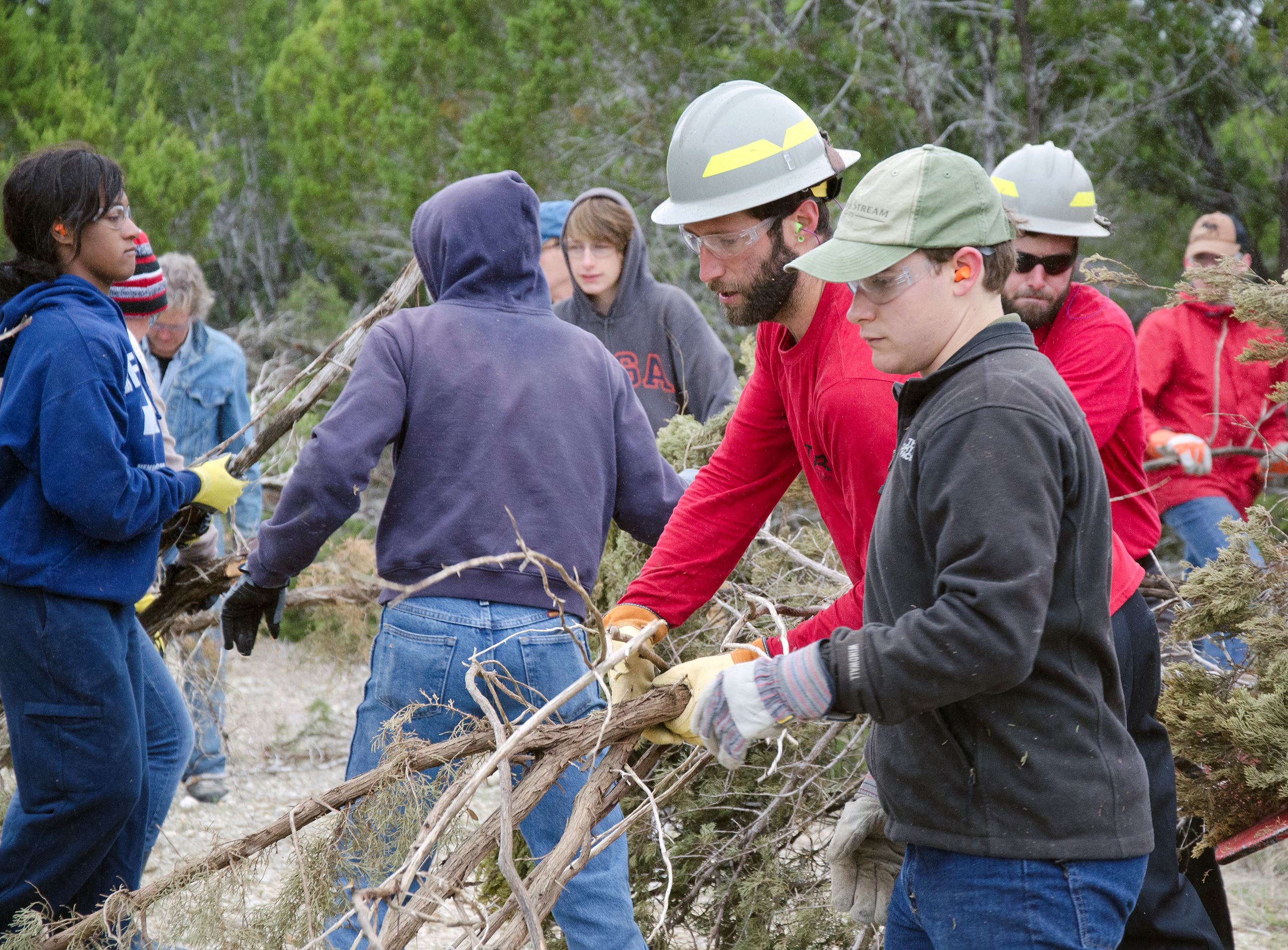 Fifty-two volunteers braved cold temperatures to move 16 tons of brush at Lakeway City Park at the seventh city-wide Firewise Field Day on April 7.  Prior to the workday, Chainsaw Champions Dave Cross and Elmer Tyler worked for two months limbing up the cedar trees and stacking brush.  Friends of the Parks helped stack the brush on their monthly workdays.  Lake Travis Fire Rescue offered chainsaw support and donated many man-hours and the use of their chipper on the Field Day.  Chips were blown onto on a badly eroded slope to help stabilize it and create conditions for plants to grow. Altogether the group effort paid off with a cleaner, more beautiful area of City Park. 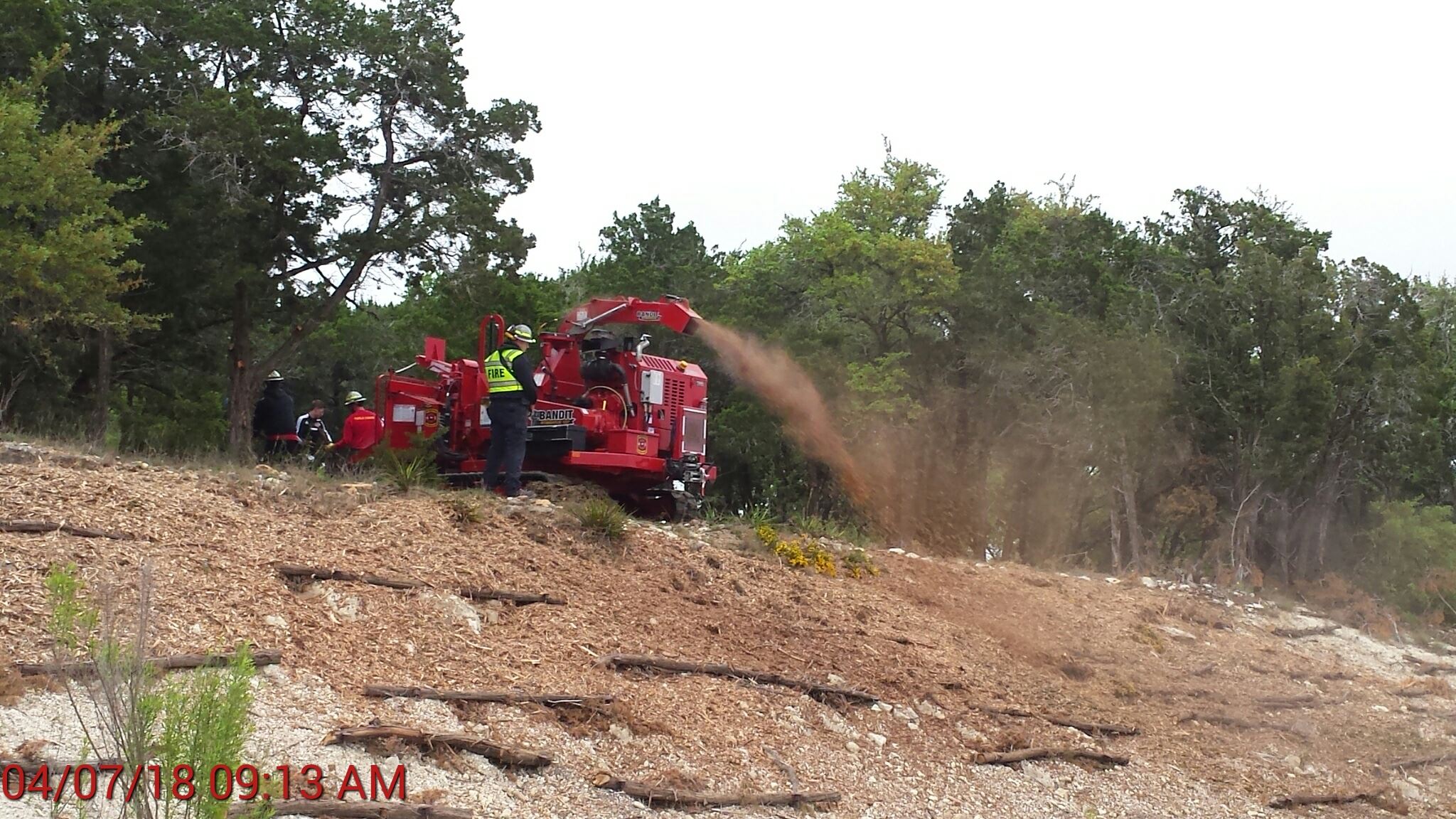 
A strong wind event in 2014 pushed over, twisted, or snapped many trees in Rebel Park, creating a significant wildfire risk to nearby homes on Corinthian. Neighbor Ashley Bryan and her dog Sophie stand next to one pile of toppled trees for perspective. 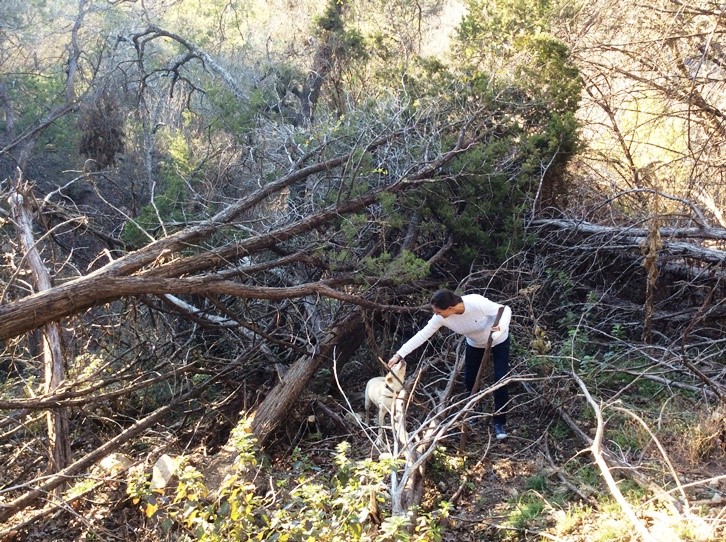 Fifty-eight volunteers cleared three quarters of an acre of dead and downed wood in a single morning, dragging roughly eight tons of brush to a chipper.  See workday photos by Lake Travis View freelance photographer Sue Ellen Knolle here. Lake Travis Fire Rescue donated the use of its chipper and the time of its wildland fuel reduction crew for the day, chipping the wood and then spreading tons of mulch through the newly open forest.  For several weeks prior to the workday, Chainsaw Champions Steve Bryan, Elmer Tyler and Dave Cross worked tirelessly cutting and stacking the tangled piles of dead trees into manageable stacks for the volunteers. The results of all of those hours of work are shown below.  Congratulations, Firewise volunteers, on another outstanding success! 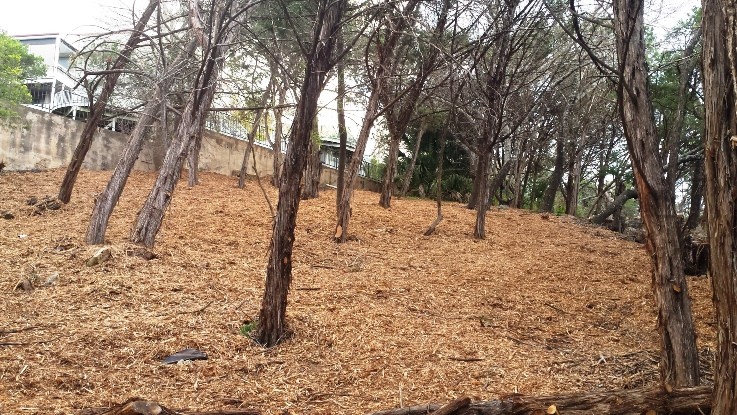 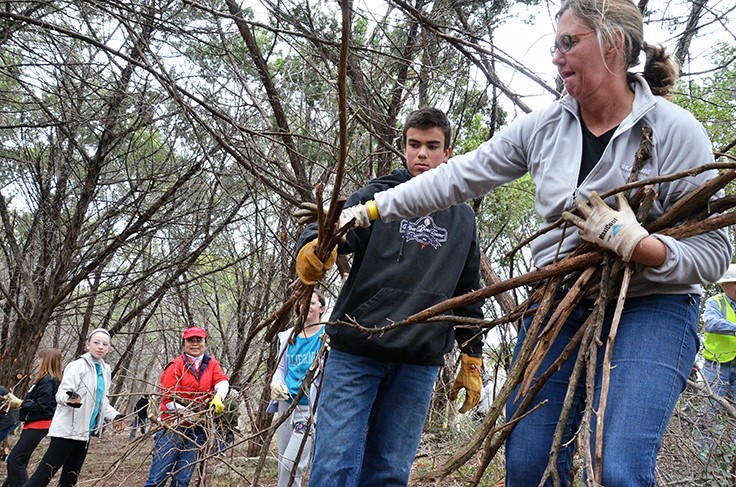 Sixty-three volunteers cleared 21,800 pounds, or 10.9 tons, of brush from Sailfish Park during a Firewise Field Day on March 7. These volunteers donated 221 hours at a value of $5,100, based on an hourly rate of $23.07 per volunteer hour, which is the value of the donated work used by the national Firewise Communities organization. 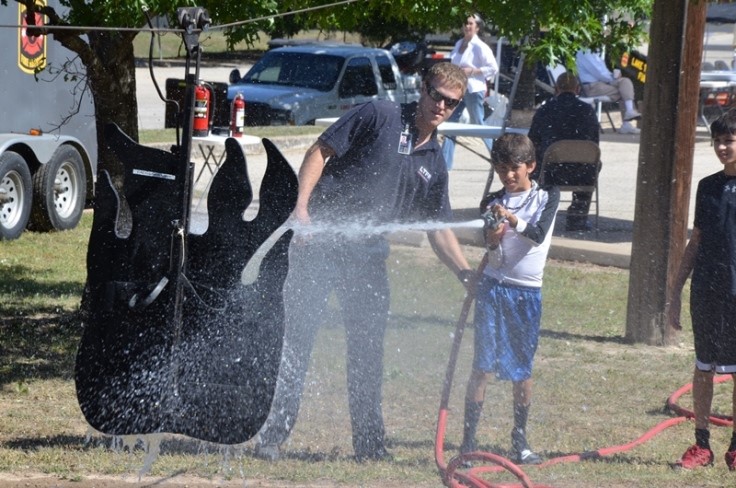 The September 28th Firewise Field Day was a success on all counts.  This was the second city-wide workday spearheaded by the Lakeway Firewise Committee in 2013.

Despite oppressive humidity, 70 hardy souls spent the morning dragging brush out of Hamilton Greenbelt.  Five "trail bosses" led volunteers in the effort to clear fuel from behind 10 homes on Barbie Court. Volunteers made dozens of trips uphill and down, dragging heavily loaded tarps to collection sites where the brush was chipped into mulch.

Neighborhood residents were well represented, as were high school students and community organizations.  Special thanks to National Vendors, Walgreens, Friends of the Parks and CP&Y Engineering for bringing strength in numbers.  Kudos also to Fred Hazen, Jim Ball, and Dean Yarian, who spent weeks in advance of the workday reaching out to the civic groups, youth and neighborhood residents, respectively.

Lake Travis Fire Rescue provided EMS support, the chipper and a crew to chip the brush piles. The City Parks and Recreation Department supplied two employees to move heavy wood with bobcat and ATV, while the Lakeway Police Department furnished an officer for traffic control. Progressive Waste Services hauled the chips to a wood recycling facility at no charge.

The massive brush piles generated more than 100 cubic yards of wood chips. That's three large dumpster-loads, equivalent to 17 fully loaded dump trucks!   Most of the brush came from trees that died as a result of the 2011 drought.

Excess brush and other wildland fuels that remain behind the homes on Barbie Court will be removed by a contract crew. The value of the volunteer labor invested that morning totals $6,300.  That's a week of contract labor at $1,200 per day.  Way to go, Firewise volunteers!

Check out photos of the event at the The Lake Travis View,and the Friends of the Parks website.

Click here for a map of the work area.  For more information on Lakeway's Firewise Program, follow the links on the left menu bar.

This workday is one step in an ongoing effort to reduce the risk of catastrophic losses to wildfires such as those that occurred in Bastrop, Spicewood, and Steiner Ranch.

For even more past events, visit the Lakeway Wildfire Preparedness In the News page.